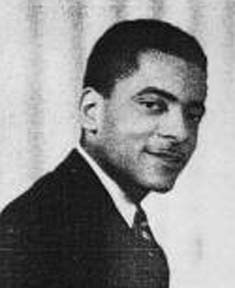 TEDDY WILSON was born in Austin, Texas in 1912. Six years later his parents moved to Tuskegee, Alabama. Shortly thereafter he started piano lessons but stopped after one year. His interest was revived at 13, when he heard the neighbor's boy play good dance piano. He bought a chord book and started developing a style. He decided on a professional career while attending Tuskegee Institute.

He worked around Detroit and Toledo a couple of years before going to Chicago in 1933. There he played for Jimmy Noone and Erskine Tate., and a few weeks with Louis Armstrong. He made his first recordings during the latter engagement. He went to New York in 1934 where he worked for Benny Carter and Will Bryant. He first attracted national attention through his work on the Benny Goodman Trio recordings. He was featured with the Goodman trio and quartet for three years starting in 1936. He formed his own dance band in 1939. Later he cut the cut the unit to a seven-piece group.

A skilled technician, he gets variety and contrast through his unusual ability to create interesting melodic passages. His pleasant stimulating style has had a marked influence on contemporary musicians. He spends much time in the study of serious music and is partial to the works of Scarlatti and Debussey for the improvement of technique.

All of these are available as midi, .pdf files, printed sheet music, (audio) recorded on tape or CD

midi Chant Of The Jungle

midi Do You Ever Think Of Me

midi How Am I To Know?

midi I Cried For You

midi I'll See You In My Dreams

midi I'm In Love With You Honey

midi I'm Thru With Love

midi If I Had You

midi Once In A While

midi Something To Jump About

midi That's How Rhythm Was Born

midi Thinking Of You (I've Grown So Lonesome)