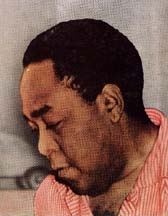 Parker, with Louis Armstrong and Duke Ellington, is widely considered one of the most influential of jazz musicians. Parker acquired the nickname "Yardbird" early in his career, and the shortened form "Bird" remained Parker's sobriquet for the rest of his life, inspiring the titles of a number of Parker compositions, such as "Yardbird Suite", "Ornithology" and "Bird of Paradise."

Parker played a leading role in the development of bebop, a form of jazz characterized by fast tempos, virtuoso technique, and improvisation based on harmonic structure. Parker's innovative approaches to melody, rhythm, and harmony exercised enormous influence on his contemporaries. Several of Parker's songs have become standards, including "Billie's Bounce", "Anthropology", "Ornithology", and "Confirmation". He introduced revolutionary harmonic ideas including a tonal vocabulary employing 9ths, 11ths and 13ths of chords, rapidly implied passing chords, and new variants of altered chords and chord substitutions. His tone was clean and penetrating, but sweet and plaintive on ballads. Although many Parker recordings demonstrate dazzling virtuosic technique and complex melodic lines – such as "Ko-Ko", "Kim", and "Leap Frog" – he was also one of the great blues players. His themeless blues improvisation "Parker's Mood" represents one of the most deeply affecting recordings in jazz. At various times, Parker fused jazz with other musical styles, from classical to Latin music, blazing paths followed later by others. 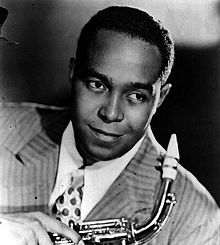 Parker was an icon for the hipster subculture and later the Beat generation, personifying the conception of the jazz musician as an uncompromising artist and intellectual, rather than just a popular entertainer. His style – from a rhythmic, harmonic and soloing perspective – influenced countless peers on every instrument.

All of the midi files on this server are modified and somewhat abbreviated. There is enough of each song (about 20 measures) to give you a feel for what they are like. These selections are taken from a book of piano solos. Therefore printed music is available for piano only. With a little imagination, one can "orchestrate" parts using midi, (midified) I tried and you can let me know how I did.

All of the selectopns are available as midi, printed sheet music, .pdf. files, recorded on tape or CD. To order anything click here

midi Thriving From A Riff (Midified)

Back To The Lounge or Return To Main Lobby