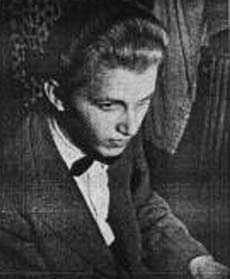 Mel Epstein was born to Russian Jewish parents, Milton Epstein and Mildred Mark Epstein,[1] and began playing piano as a child. He performed jazz professionally in New York City as a teenager. As early as 1939, he was working with Bobby Hackett, George Brunies, and Zutty Singleton. He changed his last name to Powell in 1940.

In 1941-42 he played, composed, and arranged for Benny Goodman. A member of Glenn Miller's Army Air Force Band in 1943-45, he played with Django Reinhardt in Paris at war's end. Powell briefly returned to Goodman's band, then worked in Hollywood after World War II and married actress Martha Scott. In 1948 he played himself in the movie A Song Is Born as the jazz pianist working with Benny Goodman. In this movie he worked along with many other famous jazz players including Louis Armstrong.

After studying at Yale with Paul Hindemith in 1948-1952, he all but gave up jazz for classical composition. He was a member of the composition faculty at Yale

from 1958 to 1969, a founder of the Yale Electronic Music Studio and a founding editor of Perspectives of New Music. In 1969 he moved to California to serve as founding dean of the California Institute of the Arts in Valencia, California. After serving as acting head of the Institute he was awarded the Roy O. Disney Professorship of music, and taught and composed at CalArts until his death. In 1990 he received the Pulitzer Prize in Music for his concerto for two pianos and orchestra,Duplicates.

In 1987 he returned to jazz to play a jazz festival on the cruise ship SS Norway with Benny Carter, Howard Alden, Milt Hinton, and Louie Bellson. One performance has been documented on the CD release The Return of Mel Powell (Chiaroscuro Records). This CD includes twenty minutes of Powell discussing his life and his reasons for leaving jazz.

All of these are available as midi, .pdf files, printed sheet music recorded on tape or CD.

Back To The Bar or Return To The Front Lobby?