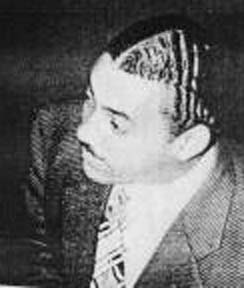 BILLY KYLE was born in Philadelphia, PA., in 1913. He began the study of standard piano at 8, and continued eight years. At 12 he earned twenty-five cents a week accompanying the singers at Sunday School. He also played with the West Philadelphia High School Symphony Orchestra. Billy started playing popular songs by ear and broke into dance work at neighborhood block parties. After completing high school, he worked in and around New York for three years until 1934. He returned to Philadelphia where he worked at various night clubs and teamed with George "Bon Bon" Tunnell on a radio show. He joined Lucky Millinder, in 1936, sharing the piano work with Edgar Hayes. He went to the Johnny Kirby band in 1937, where he remained until he entered the army early in 1943. He thought his musical career was ended in 1935 when his arm was broken in several places. The accident happened in Baltimore, when he awoke to find the hotel in which he was staying on fire. Trapped on the third floor, he tried to lower himself from the window to the floor below, slipped and fell to the street level. He was taken to John Hopkins' Hospital, where the arm was placed in a cast. Fortunately it healed perfectly. His style was most influenced by Earl Hines.

All of the midi files on the net have been cut back.. Features such as stereo and other effects have been stripped out. These are snips of the originals.
All of the songs are available as midi, .pdf files, printed sheet music recorded on tape or CD.