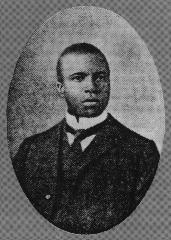 Scott Joplin was born in Texarkana, Texas on November 24, 1868. He grew up in a musical environment since most of his family played an instrument or sang and consequently young Scott became fascinated with the piano. He taught himself to play with considerable proficiency so that by the age of 11 his prowess had reached the white community and particularly aroused the interest of an old German music teacher, him as a pupil.

Joplin left home in his early teens hoping to find his fortune through his talent of music. He lived in St. Louis from 1885 to 1893 playing piano in local honky-tonks. Chicago was his next stop, being one of a number of musicians who sought work among the clubs, bars, and honky-tonks that sprang up around the World's Columbian, Exposition. For a brief period following, he settled in Sedalia, Missouri where he played second cornet in the Queen City Concert Band.

The next two years he spent touring with a vocal group he had formed. It was during this phase that Joplin began to write his own compositions, some of which he published--a pair of waltz songs and three piano pieces. The vocal group dissolved in 1896 and Scott returned to Sedalia.

The return to Sedalia marked a crucial turning point in Joplin's career. He decided to attend George Smith College, an educational institution for blacks sponsored by the Methodist Church, where he worked at translating the elusive rhythms of ragtime into musical notation and also continued to refine his creative imagination. Scott composed his first rag which he called "The Maple Leaf Rag", immortalizing a club in Sedalia by that name. The best pianists flocked to the Maple Leaf Club which had become a favorite in Sedalia due to the Joplin piece. This put Sedalia on the map. Joplin despite this fame had difficulty getting the composition published. A local firm turned it down as did a St. Louis publishing house which had bought his original Rags.

Prosperous from his royalties, Joplin retired from the ragtime world of piano playing, bought a large house and began concentrating on composing and teaching. Although he continued to turn out rags, he turned his sights to larger and broader horizons. 1902 brought "Rag Time Dance", a folk ballet based on material composed three years earlier. Soon after came his first ragtime opera entitled "A Guest Of Honor". Neither of these efforts met with any success and at the same time personal problems began to afflict Joplin.

His baby daughter died only a few months after birth and relations with his wife, who had no interest in music, ultimately lead to a separation. Following the break with his wife, Joplin moved briefly back to Chicago, then to St. Louis and on to New York, all within the year. Once again he hit the entertainment circuit and composed in hotels and rooming houses, and attempted to win favor of his new compositions. In 1909 he remarried happily, since his first wife had died, and settled in a house on West 41st Street later to move uptown to Harlem. He now began to devote most of his time to a new opera which he called "Treemonisha" The original production of "Treemonisha" received only a single performance during Joplin's lifetime -- this took place in Harlem in 1915. Void of scenery, costumes, lighting, or orchestral backing, the drama seemed then unconvincing Joplin accompanied a group of singers on the piano resulting in what seemed to be a rehearsal. The audience, including potential backers, was indifferent and walked out. The disaster of "Treemonisha" dealt a mortal blow to Joplin's spirit. After the debacle, his disintegration increased, until he was taken to Manhattan State Hospital in the Fall of 1916. Even there he continued to compose during his occasional lucid moments. He never recovered, and died in the hospital April 1, 1917 at the age of 49.

When you think about Ragtime music, almost everybody considers it merely something played in saloons by piano players with funny hats, striped shirts and sleeve garters . . . sitting under Tiffany lamps and slapping battered upright pianos that sound as if they had been dipped in water. Ragtime? You mean that honky-tonk, rat-a-tat-tat music from the turn of the century? Well . . . grand opera, it's not, however Ragtime was to appear in an opera called, "Treemonisha", composed by the self-styled King of Ragtime, Scott Joplin,in 1911.

Ragtime rhythms came to light in 1894. The piano style of the day had developed a bouncing, thump-pah bass and an ornate, syncopated melodic line. Because it sounded as ragged as a torn cloth, it was called "ragged time", then "ragtime". Its effect was intoxicating, and it spread rapidly into theaters, dance halls, and, via sheet music and piano rolls, homes throughout the country.

In the hands of authentic practitioners like Joplin, Ragtime was a disciplined form capable of astonishing variety and subtlety. Usually it had four 16-measure themes, and like a rondo, it habitually reprised its first theme immediately after the introduction of each succeeding one. Joplin did for the rag what Chopin did for the mazurka. His style ranged from tones of torment to stunning serenades that incorporated the bolero and the tango. Ragtime collapsed of overexposure and the rise of jazz. It began to stir again fitfully around 1950. Ragtime Clubs sprang up and some of the old-time rag artists regained some of their old fame.

Then in 1970, LP's were issued on which rags were played by such "legitimate" pianists as Joshua Rifkin and William Bolcolm. Ragtime is a "chord" rediscovered ... and for some reason, it has found its preservation capital in Los Angeles ... especially at the numerous Shakey's Pizza Parlors, where ragtime pianists spend hours playing requests for the oldtime music. Ragtime music clubs have sprung up with membership rosters resembling the Hall of Fame. Eighty-eight year-old ragtime pianist, Eubie Blake, Jimmy Durante, and musicians all over the world have restored the ecological balance to a totally American musical form that had almost died out.

Now, it is coming back!

Much has been written about Ragtime in the last year. In January, 1972, Joplin's old rag opera was performed in Atlanta and and received unanimous acclaim. Joshua Rifkin's, "Piano Rags by Scott Joplin", was among the 30 top best-selling classical albums of 1971.

W.C. Chester, a musician who played the big-band circuit in the 20's, recalls, "I wasn't around for rag, but I remember hearing it at my grandfather's. It's a nice, simple melody. It's catchy. People immediately respond to it like an old friend." And more than anything, people today need this kind nostalgic outlet.

The "Rag Times," a bi-monthly newspaper has been established by the Maple Leaf Club of Los Angeles . . . dedicated solely to the preservation of classic ragtime . I t features news of current rag events, ragtime record reviews and articles by and about ragtime pioneers.

It has been seventy years ... two full human generations (and one electric computer age) since a young Kentuckian named Ben Harvey, playing and singing a ragtime song in a Gotham vaudeville theatre, inaugurated a remarkable era. Seventy years ... long enough for an American music to arise and bloom, to enthrall a nation (and Europe, too), to fade and be forgotten.

And then to be remembered again !

With these midi's, we bring back many of the classics of one of America's first black Ragtime composers with arrangements in their original form. Scott Joplin has long been dead, but his music lives again and may make him become one of America's best loved composers.

midi A Breeze From Alabama

mp3 The Entertainer (using my synths)

mp3 The Entertainer (midi orchestrated using my synths)
This link demonstrates only the background of the song. Perhaps you would like to play along.

midi The Sycamore a concert rag

BACK TO GRAND BALLROOM or OUT TO MAIN LOBBY