Express To The Music Links 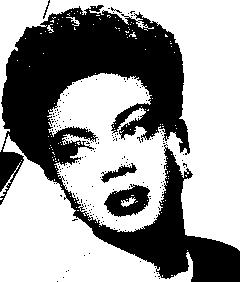 Born in Trinidad, raised in Harlem, Scott had phenomenal classical chops which she leveraged into a jazz and show business career.
She was the first African-American to have her own television show and was a courageous champion of civil rights.
An important American artist who deserves to be much better known. Hazel Scott, one of America's foremost pianists, was born in Trinidad, June 11th 1920. Her training in classical music was received at Juillard School of Music in New York City and her jazz technique, she says, she owes to Art Tatum and Teddy Wilson.

In October 1940, she was starred at the opening of Barney Josephson's Cafe Society Uptown, just off Park Avenue, and ever since that date her pianistic pyrotechnics have been acclaimed, not only throughout the United States but in Europe as well.

She appeared in the production, "Priorities of 1942" and has played twice at the famed Carnegie Hall in New York City. Her motion picture career included the following pictures: SOMETHING TO SHOUT ABOUT, I DOOD IT, BROADWAY MELODY, THE HEAT'S ON, and RHAPSODY IN BLUE. The combination of two approaches to piano in classical and jazz make Hazel Scott an outstanding contribution to any music lover's library.

Hazel Scott was married to the Rev. A. Clayton Powell, Jr., noted Congressman, preacher and editor. A popular pianist and organist from the 30's until the late 60's. The bride of Adam Clayton Powell, Hazel appeared in many motion pictures and released a few dozen albums. Her most famous hit was "Tico Tico" and her style is a STRIDE / BOOGIE WOOGIE popular in the 40's.

I created a special CD for an internet buddy. Copies are $15.00 + shipping

These are truly rare non-commercial recordings. They are promos introducing the new wonder of radio, FM.

The Gospel In Words And Music: Sermonettes by Rev. Adam Clayton Powell, solos by Joe Williams & The Stamps Baxter Quartet. Music by The Congregation Of The Abyssinian Baptist Church.

The following songs are available as midi, .pdf files, tapes CD and/or printed scores. The server has samples of each {midi} about 20 measures per song. Most of the Mp3 files are complete.

midi If I Had You (Piano Solo)

mp3 If I Had You
(Piano Solo my synths)

mp3 My Blue Heaven (midified - my synths)
Listen to both choruses

midi Should I (Piano Solo)

mp3 Should I
(Piano Solo - my synths)

midi You Were Meant For Me
(Piano Solo)

mp3 You Were Meant For Me
(Piano Solo - my synths)