By David A. Jasen 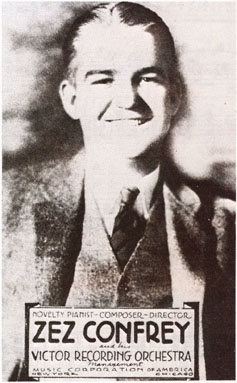 Zez Confrey was born Edward Elzear Confrey on April 3, 1895 in a modest little house in Peru, Illinois. He died November 22, 1971 in his beautiful home in Lakewood, New Jersey. The composer of over one hundred songs and instrumental pieces, Zez Confrey will always be especially remembered for his outstanding novelty ragtime hit, "KITTEN ON THE KEYS."

Zez was the youngest of five children born to Thomas J. and Margaret Brown Confrey. When Zez was four, his eldest brother Jim (who played seven instruments) was taking piano lessons, and after one of the lessons, Zez toddled over to the piano and picked out the same piece Jim was being taught. Lessons for precocious Zez began soon after!

While attending LaSalle-Peru High School, Zez played in and conducted his own orchestra. After graduation, he studied at the famous Chicago Musical College with Jesse Dunn and Frank Denhart. His thorough training in the classics introduced him to the contemporary music of the French Impressionists, Claude Debussy and Maurice Ravel. These composers had a profound influence on Zez, which his compositions were to reflect.

Zez's first pieces were songs ("ON THE BANKS OF DEAR OLD ILLINOIS"), one-steps ("OVER THE TOP") and a revolutionary rag, "MY PET," which combined impressionistic harmonies with the rhythmic complexities of piano roll arrangements in a ragtime format. Zez successfully realized with "MY PET" what Scott Joplin had achieved nineteen years earlier with "MAPLE LEAF RAG." His innovative use of diverse elements was as startling and original as Joplin's creation of a kind of music with an organized and deliberate format utilizing extended syncopations with an even, steady rhythm. These permutations were to change the course of ragtime for the entire 1920's.

During the years he attended Chicago Music College (which was run by Florenz Ziegfeld, Sr.), Zez made his living by playing piano with an orchestra he and his brother Jim organized. They opened the Kaskaskia Hotel in April, 1915, and then played at the Clifton Hotel in Ottawa for a while. Automated player pianos were in vogue during this time, and Twaify's, a favorite hang-out in LaSalle, had an especially out-of-tune and partially broken, coin-operated machine. Zez heard this piano so many times that he was able to imitate it exactly on a regular piano...he would start by pumping the pedals, dropping a coin and then going into his imitation of that broken-down nickelodeon. This version of "TWAIFY'S PIANO," unfortunately never published, became a standard part of his performing repertoire.

At the start of World War I, Zez enlisted in the Navy and was featured in a skit with a touring show, "Leave It To Sailors." Part of the routine presented Zez and a violinist from Waukegan who eventually became known as Jack Benny.

The Confrey fortunes began to take shape during the war years when Zez auditioned for the QRS Piano Roll Company, expressing that he felt he could make better arrangements of pop tunes than the other arrangers. QRS quickly agreed and signed him. He made about one hundred and twenty-seven rolls for QRS from 1918 to 1924. His arrangements were consistently tasteful and filled with inspiration.

His success in making rolls and composing hit tunes led him into recording (piano solos for the new Chicago company, Brunswick, then for Edison and Emerson; and playing with an orchestra for the Victor Talking Machine Company), and appearing with his own orchestra in vaudeville. As he told me, "They offered me so much money, I couldn't turn it down."

During 1922, Zez composed three popular songs which further stimulated demand for his services ("STUMBLING", "TRICKS" and "DUMBELL"). The following year, Jack Mills published what was to be his phenomenally successful book, ZEZ CONFREY'S MODERN COURSE IN NOVELTY PIANO PLAYING; a folio that remained in print for over forty years! (1963 it went out of print)

On February 12, 1924, Zez participated as a soloist and arranger in the historic concert at Aeolian Hall in New York City. It was billed as "Paul Whiteman and His Palais Royal Orchestra Will Offer An Experiment in Modern Music, Assisted by Zez Confrey and George Gershwin." Later that year, he began making piano rolls exclusively for Ampico and continued to do so until 1927. Within those three years he arranged and performed on forty-four rolls for them.

As popular music was turning more and more to jazz bands - at first, small combos and then, large orchestras - Zez turned to composition as his chief source of enjoyment and financial security. But, by this time he had made a lasting contribution to those jazz and dance bands where, because of the popularity of his novelty rags, every band pianist was employing those runs and breaks that Zez had invented as part of his compositions (and within his piano roll arrangements). Zez's influence was all-pervasive during the twenties.

When he retired from active composing after World War II (he was a victim of Parkinson's disease), Zez's compositions ranged from the complex novelty rags to concert studies, miniature operas, popular songs, mood pieces and simple children's works for beginners.

All of the midi files listed are cut down. Most of Confrey's piano pieces run better that 100 measures. These snips are 24 - 32 measures each. Most of the Mp3 files are complete.
All of the songs are available as sheet music, midi , mp3 and / or audio.

* All of the sheet music (90 songs) in .pdf format. Songs will be in alpha order with an Inter-active Index

Anything can be ordered by email by clicking: here

I mp3 Captain Butterscotch
my synths 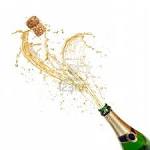 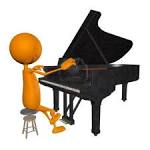 RHYTHM VENTURE is an Example of what George Gershwin meant when he said Confrey was a source of ideas.

midi Sunshine From The Fingers (1936)

Back To Main Ballroom, the Front Lobby or send email to Al Levy