Charles Kassel Harris (May 1, 1867 – December 22, 1930) was a well regarded American songwriter of popular music. During his long career, he advanced the relatively new genre, publishing more than 300 songs, often deemed by admirers as the "king of the tear jerkers". He is one of the early pioneers of Tin Pan Alley. 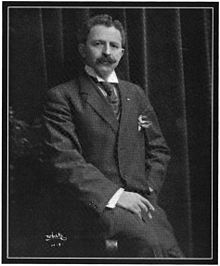 Harris was born in Poughkeepsie, New York into a family of ten children. His father was a fur trader and moved the family to Saginaw, Michigan and Milwaukee, Wisconsin, where he grew up. From his early fascination with the banjo, he wrote his first song "Since Maggie Learned To Skate" for the play The Skating Rink by Nat Goodwin in 1885.

In 1891, Harris wrote "After the Ball", a song about an old man recounting the story of his long-lost love to his niece. He caught the attention of John Philip Sousa, who played the tune at the 1893 World Columbian Exposition in Chicago, boosting sheet music sales to in excess of five million copies in the 1890s. His next hit "Break The News To Mother", about a dying soldier, coincided with the Spanish American War in 1897 and furthered his popularity.

Later, Harris began writing songs for musicals, working with Oscar Hammerstein. His plays The Scarlet Sisters and What's The Matter With Julius had moderate success. He died in New York City in 1930.

midi Bless Your Ever Loving Little Heart (Henry I Marshall 1939)

midi Heaven Will Protect The Working Girl (A. Baldwin Sloane 1937)

midi Life Is Only What You Make It After All (A. Baldwin Sloane 1937)

midi My Sweetheart's The Man In The Moon (James Thornton)

midi She Is More To Be Pitied Than Censured (William B. Gray 1943)

midi She May Have Seen Better Days (James Thornton)

midi While Strolling In The Park One Day (Ed Haley 1943)

Return To The Piano Bar ? or Return To Main Lobby or