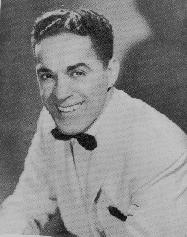 The following is quoted from a book published in 1946.

Frankie Carle's first album of Piano Serenades, which appeared in 1941, sold over 50,000 copies and is still selling. Frankie Carle ranks as one of America's most popular instrumentalists, the idol of millions of American radio fans to whom Horace Heidt's great aggregation of musicians has come to mean Horace Heidt with Frankie Carle.

This piano wizardry which we have come to associate with the name of Frankie Carle is no hot-house product, but the result of hard work and solid study. Frankie's first piano lesson came at the age of six. At the age of nine, he played his first professional engagement. At fourteen, Frankie had organized his first band and was successfully leading it. But neither of these events interrupted sixteen years of continuous and genuine study of the classics. Frankie's piano style won his almost instantaneous recognition and resulted in attractive offers, first, from Mal Hallet's Orchestra and later from Horace Heidt. When Frankie made a piano album, C-23, for Columbia, it quickly skyrocketed, unadvertised, into popularity, and set an all-time record in sales by going over the 200,000 mark. Today, Frankie Carle's texts on piano technique are in wide use by piano teachers throughout the country, and his piano arrangements, with their insistent offbeat, beautiful chromatics, and scintillating figures, are eagerly sought after and imitated.

It was shortly before Frankie Carle joined the Heidt Brigade that he wrote the now immortal "Sunrise Serenade." The song taxed the ability of the best singers, and Broadway, accustomed to the manufactured hodge-podge ground out by the average music miller, took a little time to warm to the fresh originality of Sunrise Serenade. When it did, assisted by a great Glenn Miller and Glen Gray arrangement, "Sunrise Serenade" became one of the big hit paraders. In 1939 Frankie Carle was awarded a prize for composing the Best Song of the Year. There followed "A Lover's Lullaby" and other hits.

There are great songwriters, there are great instrumentalists, but there are few who can top these rare abilities with that still rarer quality-great showmanship. At the age of fifteen, Frankie was touring vaudeville as accompanist to May Yohi, one-time owner of the fabulous Hope Diamond. Showmen who saw the act always recall the quiet, unassuming pianist who attracted notice to himself in a way they could not explain. That magic quality has remained with Frankie through the years, growing brighter as the riches of experience have added luster to it. When he joined the Heidt organization, long known for its strikingly novel presentations, Frankie Carle quickly proved himself a stellar showman among showmen. To this outstanding achievement, the present billing of the band, Horace Heidt with Frankie Carle, offers its own testimonial.

Frankie Carle is still young despite a career crowded with the crowning accomplishments of one of the richest creative talents of our time. As you play through the piano arrangements in this album of favorites; you will agree that Carle's genius is destined to leave a profound and lasting impression on America's music culture.

All of the midi files have been abbreviated on the server. Approximately twenty measures of each. Some, (*), have a full piano chorus + a snippet of FRANKIE CARLE'S rendition. All are available as FULL General Midi (plays on your sound card), .pdf files (for printing the sheet music) and tapes or CD of "Frankie Carle Midified". The tape or cd features the same midi files but in some cases I add a rhythm section plus orchestral background.
All of the mp3 files are complete.

mp3 A Lover's Lullaby
my synths

midi Lullaby Of The Rain

mp3 Lullaby Of The Rain
my synths

midi Rose Of Tralee (The)

mp3 Rose Of Tralee (The)
my synths

midi Sorrento (Come Back To)

mp3 Sorrento (Come Back To) - my synths

midi Sunrise Serenade (as he played it)

mp3 Sunrise Serenade (as he played it) - my synths

mp3 This Day my synths

Return to the Ballroom?, back to the Main Lobby ? or
send me a note by clicking here